The Arbeitstagung of the Deutsche Gesellschaft für Volkskunde (dgv) in September 1969 until today has been historicized as a German event, mirroring a decisive critique of the discipline’s nationalist and völkisch epistemologies, and an orientation towards social sciences. But if we look at the archived registrations of this conference, we can reveal the buried journeys of international scholars: Sedat Veyis Örnek, İnci Akidil (Krause), and Z. Şenol Özyurt were present in Detmold but absent in the reports both in Turkey and Germany. As we will see, their stay in Westphalia was not a one-time visit but part of a transnational scholarly exchange that can be unpacked through an histoire croisée, by exploring the interwoven history of travelling ideas and scholars that may reveal neglected trajectories.
We already know, especially from the US example, that a “paradigm shift” in folklore took place in the late 1960s in several countries in the world. In line with the 1968 protests, revolutionary folklorists rid the “past” and reacted to the post-war political developments in a scholarly yet lively manner. It is a fascinating detail that these movements have been told in accounts that are deeply grounded in the quite reliable, often unexpected exchange between history and stories and history again: The “Young Turks,” as Richard Dorson’s (1972) evocation of the Ottoman past declared, offered folklore studies new-contextual, anthropological, interdisciplinary perspectives rooted in politics. The revolutionary men introduced the “everyday” and freed the history-bounded meanings of folklore, especially when Dan Ben-Amos (1972) defined folklore as “artistic communication in small groups”.
However, the Turkish case is a bit complicated: Long before the establishment of a folklore department in the USA, Pertev Naili Boratav (1907–1998) had founded the Department of Turkish Folk Literature and Folklore at Ankara University, Faculty of Languages and History-Geography in 1947. Yet, the heightening racist-nationalist discourses, that likened to prevalent McCarthyism in the USA, ended folklore’s institutionalisation in 1948. Boratav, along with professors Behice Boran and Niyazi Berkes, was accused of spreading communism and became an open target of witch-hunting. A special decree from the Turkish Great National Assembly cut the funding of the department. He had to leave his job and communicate his scholarship from Paris, working at the Centre national de la recherche scientifique, CNRS, first as maître de conference and later as chargé de conference. Boratav also worked at the Ecole Pratiques des Hautes Etudes (4th Section) and conducted several classes on Ottoman Turkish (Birkalan 1995: 76-77). İlhan Başgöz (1921–2021), Boratav’s student and department’s assistant, who studied with a state scholarship at the time, served as a schoolteacher in Anatolia after the department was closed. Later, he obtained a Ford Foundation grant, moved to the USA, and continued his folklore career first at the University of California, then at Indiana University (Başgöz 1994).
Understandably, the folklore debate in Turkey befell muted. However, both Boratav and Başgöz received prestigious awards from the Turkish Ministry of Culture and folklore organizations as of the 1990s, but these awards addressed Boratav and Başgöz only as individuals. A systematic coming to terms with a stained disciplinary past never took place. Folklore became a subject between literature and theatre, while the Turkish state claimed folklore activities outside the university. But the three Turkish travellers to Detmold in 1969 remind us to question such a nationally confined disciplinary history. 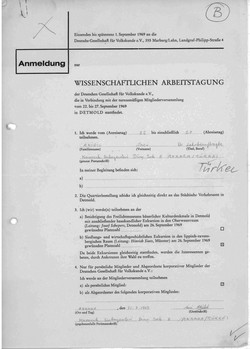 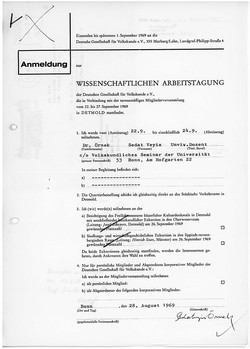 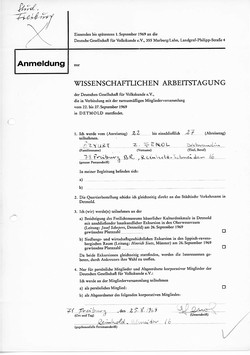 Among the three colleagues, Sedat Veyis Örnek (1927–1980) is perhaps the most well-known figure in folklore studies in Turkey, as he revitalised academic folklore in the 1960s. He studied Religionswissenschaft, Orientalistik, and Völkerkunde at the Eberhard Karls Universität Tübingen (1957-1960), where he worked with, among others, Prof. Dr Thomas Barthel who taught Völkerkunde (Ozan 2015). In Tübingen, he also completed his PhD thesis Die religiösen, kulturellen und sozialen Reformen in der neuen Türkei (von 1920 bis 1938) verglichen mit der Modernisierung Japans (1960), tutored by Hans Rothfels (1891–1976), who re-migrated to Germany from the USA after the Second World War and taught contemporary history at the University of Tübingen since 1951. Örnek returned to Turkey, started his position at the Ankara University Department of Ethnology, and taught courses on folklore – such as rituals, children’s folklore – and published books and articles. In 1980, he supported the establishment of the Department of Folklore at Ankara University. Örnek’s untimely death, only three months after the establishment of the department, barred further academic activities of folklore. During his post in Turkey, he had visited German folklore institutions on various occasions. A short-term DAAD grant enabled him to become a visiting scholar at the Volkskundliches Seminar at the Universität Bonn and attend the Detmold meeting as well.
Both İnci Akidil and Şenol Özyurt were PhD candidates in Marburg and Freiburg, respectively. These two young women, who were among the few women attendees in Detmold 1969, came first to Marburg with DAAD scholarships. Akidil completed her PhD with a dissertation Formelhafte Wendungen in deutschen und türkischen Volksmärchen in 1968 at the Philipps-Universität Marburg. After her studies, İnci Akidil went back to Turkey and worked as a German language tutor. Having completed her required service, she returned to Germany (Kuran-Burçoğlu 2021). The fact that she registered at the Detmold meeting as a part-time German language teacher at Ankara University explains this position which her former scholarship required. Akidil wrote her Habilitation Nasreddin Hodscha und Till Eulenspiegel in 1974 at the same university, supported by the Turkey’s Ministry of Culture. Akidil later published articles on Nasreddin Hoca, children’s books, and rain rituals in Turkey.
Tracking Özyurt revealed the least information: She started her studies in Marburg and later moved to Freiburg and wrote her PhD thesis Die Türkenlieder und das Türkenbild in der deutschen Volksüberlieferung vom 16. bis zum 20. Jahrhundert at the Albert-Ludwigs-Universität in 1969, which became an often-cited work throughout years. After her graduation, she taught Turkish at the Universität zu Köln (Kuran-Burçoğlu 2021). Yet, further searches turned up no further academic work by her.
A brief assessment of Detmold-1969 participants from Turkey reveals the cross-stitched histories of the discipline: Örnek’s dissertation compared Turkey’s and Japan’s religious, cultural, and political history in the first half of the 20th century; thus, he combined a look on ‘culture’ with the new approaches that his professor Hans Rothfels, a specialist in social policies and social reforms in Germany, had developed. Akidil’s and Özyurt’s work were more closely related to folk narrative research and connected to the field of folklore studies that since the 19th century functioned as a hub of transnational and multilingual perspectives – a field, that however unanimously became marginalized by the critical debates in German Volkskunde of the 1960s and 1970s since the reformers focused on everyday, situative verbal narration rather than its written forms and their circulation.
Still, the presence of these three colleagues in Detmold pleads for more systematic research to reconsider folklore as a transnationally entangled endeavour. To achieve this, it might be useful to look not only at the scholarly outcome but also at the records of academic infrastructures that are usually kept behind the scenes. Often, they contain information that is left out by the history books that disciplines produce. It also shows that writing the history of Post-Volkskunde appears to be an open-ended task, notably in the present-day situation where burgeoning border regimes impede scholars and ideas travel freely.